The hearing therapeutics pipeline is severely lacking human-specific cell-based models to optimise and validate gene therapies and conventional drugs. Stem cell approaches offer the possibility to construct specialised 2D and 3D models of the inner ear, including hair cells and otic neurons, which are the main targets in treating hearing deficits. They would help understand gene and cell functions, model diseases, and evaluate novel therapeutic strategies. This review focuses on how stem cell technologies could be used in these fields to improve hearing research.

Around 5% of the population suffers from hearing loss, making it the most widespread sensory disorder (Wilson et al., 2017). Sound is detected  when mechanical stimulation of sound waves is converted by the hair cells in the cochlea into electrochemical signals (Fig. 1). Following stimulation, hair cells release neurotransmitters that activate bipolar neurons at the spiral ganglion, which relay information to the brain. In the majority of hearing disorder cases, the hair cells or the bipolar neurons are malfunctioning, damaged or lost, which is referred to as sensorineural hearing loss (SNHL). Almost 50% of the SNHL cases have a genetic aetiology, and over 100 genes have been linked to this hearing impairment. On the other hand, the acquired form can be caused by loud noise overexposure, infections, ototoxic drugs, and ageing (Roccio, 2021).

Figure 1. The entry of potassium ions in the endolymph side depolarises the hair cell, which leads the opening the voltage-gated calcium channels. The inflow of calcium ions from the perilymph further depolarises the cell, causing the release of the neurotransmitters to the auditory otic neurons and the subsequent action potential firings. At the same time, calcium opens the potassium channels at the base of the hair cell, allowing the potassium to leave and repolarise the cell. The identity of these neurotransmitters is still much disputed. From The Open University, Hearing 3.6: Synaptic transmission from hair cells. (https://www.open.edu/openlearn/science-maths-technology/biology/hearing/content-section-3.6).

Current treatments for SNHL rely mostly on hearing aids and cochlear implants, failing to target and act on the cause of these disorders (O’Donoghue, 2013). That may be partly because early research had not fully considered  the spontaneous proliferation of hair cells and otic neurons, as it is believed that their numbers are limited by the initial developmental phase in humans. Both originate from the otocyst (otic vesicle), then differentiate and specialise via several processes  such as tissue organisation, bundle morphology, or innervation patterns (Fettiplace, 2017). The cells then become postmitotic and functionally mature and lose the ability to proliferate. There is a lack of SNHL treatments focused on this process, which are likely to be more effective and more accessible for individuals of low socioeconomic status than current alternatives.

Difficult access to the inner ear components in humans and the translational challenges in research involving other species limit hearing research (Roccio, 2021). Stem cell approaches, such as directed differentiation and direct reprogramming, offer the novelty of 2D and 3D otic models “in a dish”. The first relies on the differentiation of human pluripotent stem cells (PSC), and the second on the fate conversion of somatic cell types into that of sensory cells. This widens the possibilities in many research areas: developmental effects and disorders, design and optimisation of gene therapeutics, ototoxins, and drugs, and in-situ cell replacement (Fig. 2). Importantly, characterisation of these derived cells is currently limited, and in the majority of the studies, the endpoint has only been described as “otic neurons-like” and “hair cells-like”. Transcriptional and electrophysiological tools could be used to provide a more comprehensive evaluation of the maturity of these cells (Roccio, 2021). 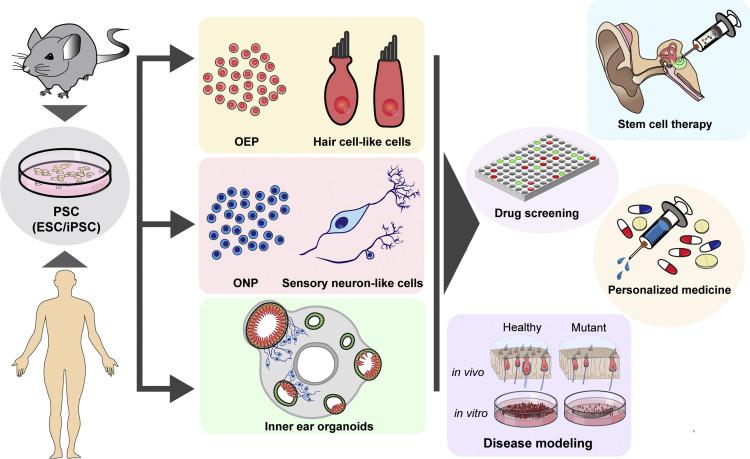 Figure 2. Derived PSC can be developed into otic epithelial progenitors (OEPs) and afterwards  into hair cell-like cells, otic neural progenitors (ONPs) and sensory otic neuron-like cells, as well as into inner ear organoids. These can be used in many therapeutic and scientific areas, including personalised medicine and disease modelling. From “Progress in Modeling and Targeting Inner Ear Disorders with Pluripotent Stem Cells”, by Tang, P.-C., Hashino, E., & Nelson, R. F., 2020, Stem Cell Reports, 14(6), 996–1008.

Applications of stem cells in developmental effects and defects research

Combining PSC-derived sensory neurons with single-cell genomics can give us a deeper understanding of the role and genotype-phenotype relationship of each “deaf gene”. This would require deriving an induced PSC (iPSC) line from patients with such mutations, and a counterpart cell line with introduced genes or “corrected” mutations through genome editing. These studies have already showed promising results, and some of their stem cell protocols are summarised in Tang et al.’s work (Tang et al., 2020).

PSC and single-cell genomics techniques can also be employed to reinforce each other. For example, phenotype rescuing uses genetic techniques to address and correct disease-associated genes to recover certain functions. PSC lines can both provide the tissue for testing and be used as a tool to characterise and optimise the recovery process (Richardson & Atkinson, 2015). They form the basis of organoids, 2D cultures, and other easily observable models providing a reinforced verification tool prior to clinical studies.

Another groundbreaking advance in hearing therapeutics is the the use of viral vectors for somatic gene editing in the inner ear. In rodent models, they are able to promote regeneration and rescue degenerated hair cells. The use of human PSC-derived otic models could help reinforce these findings, improve methodologies, and ease their implementation in therapeutics (Roccio, 2021).

The potential of stem cell-based approaches extends to the development of in-vitro bioassays for rapid and direct testing of protective, regenerative, and ototoxic drugs. While using direct reprogramming to obtain “aged” phenotypes would be easier, investment in PSC-derived cell types and otic organoids may bring a more scalable option in the long run (Roccio, 2021). Recently, the best model to combine hair and supporting cells has been pinpointed to be the inner ear organoid (Koehler et al., 2017). However, despite its relatively good morphological accuracy and the possibility for patient-specific cell type derivation, it is inefficient and difficult to reproduce.

Moreover, the current approach for assessing the ototoxic and regenerative responses in these stem cells is image-based analysis. However, lack of optimal reporter cell line development and imaging modalities hinders robust assay development. Recently, lightsheet microscopy and confocal imaging have been proposed as alternatives (Rios & Clevers, 2018). Improving upon these drawbacks would provide the drug screening field with a revolutionizing tool to streamline drug candidate selection, development of personalised pharmaceuticals, and patient stratification in clinical trials.

Another pioneering area that benefits from these technologies is in-situ conversion and cell replacement. These have been successful in other areas, such as brain repair (Liu et al., 2015) and heart regeneration (Qian et al., 2012). In hearing research, novel advancements are being made both regarding otic neurons and hair cells. First, patients with neuropathies have seen an improvement in gene delivery techniques, involving viral vectors and surgical access (Ren et al., 2019), as a result of the aforementioned stem cell tools.

Second, the possibility to convert glial cells to auditory neurons has been developed. However, gene expression in stem-cell-derived neurons differs from the native ones(Noda et al., 2018). This is potentially due to differences during early development, as the former are generated from neural crest progenitor cellss, and the latter originate from the otic placode. The extent to which this can impact in- vivo functionality remains unknown (Cahan et al., 2014).

Nevertheless, it has been observed that in-vivo environmental factors, such as local niche signals which facilitate cell specification and maturation, may improve reprogramming beyond what can be achieved in-vitro. (Cahan et al., 2014).

Finally, hair cells can be regenerated from the conversion of cochlear supporting cells (Figure 3). However, in this case, cell age plays an important role. While it is possible to convert young postnatal supporting cells using various methods, adult ones usually result in immature hair cells which may not always be functional (Richardson & Atkinson, 2015). Many of these protocols rely on Notch inhibition and Atoh1 overexpression through the introduction of viral vectors or transgenes. A recent improvement of these techniques relies on couplings and overexpressing key transcription factors (TFs), such as Atoh1 together with GARA3 or Pou4f3. However,  this approach is yet to be validated (Roccio, 2021).

Figure 3. In-vitro conversions of nonsensory cells (NS) and non-neuronal cells in the ganglion (NNSG) to induced auditory neurons (iN) (A), reprogramming of NS and supporting cells (SC) to induced “hair cell-like” (iHC) (B), and direct reprogramming of PSC to iHC (C), all rely mainly on the overexpression of TFs. (D), In situ reprogramming of iHC targets cochlear SC, preferably young cells, using surgical access and viral vectors for the gene delivery of TFs (esp. Atoh1). When there is also a loss of spiral ganglion neurons (SG), the main target is instead the conversion of NNSG to iN. This procedure uses the same gene delivery techniques, but different TFs, currently Ascl1 being the most successful. From “Directed differentiation and direct reprogramming: Applying stem cell technologies to hearing research”, by Roccio, M, 2021, STEM CELLS, 39(4), 375–388.

Stem cell-based techniques are novel therapeutic tools with immense potential to revolutionise hearing research. These methods allow to closely study otic developmental biology and model the genetic patterns behind hearing impairment. As the robustness and the efficiency of cell derivation improves, they can significantly contribute to drug screening. Ultimately, personalised regenerative therapeutics for SNHL through direct conversion or directed differentiation of sensory cells could be achieved.