The DNA molecule is often associated with its well-known double-stranded helical B conformation, first discovered using crystallographic evidence sought by English chemist and x-ray crystallographer Rosalind Franklin. While this is the most common structure, it can also be found in two other double helical conformations, the A and Z forms, and it has also been found to adopt a range of other structures such as cruciform and slipped structures, and triple helices.1 The diversity of known possible non-B conformations has increased  with the discovery of four-stranded ‘quadruple helix’ DNA molecules, also known as ‘G-quadruplexes’ or ‘G4s’, having been detected in guanine-rich regions of the genome. While this form of DNA has been previously theorized to exist and has been synthesized ‘in vitro’ by researchers, it was only found to exist in human cells in 2013. 2 It has been found to have an essential role in telomere function, replication, transcription, and translation. However, imaging the molecules remained a challenge and in January 2021, researchers identified a probe exhibiting fluorescence in the presence of G-quadruplexes which could be used in order to visualize quadruple-stranded DNA in live cells using fluorescent lifetime imaging microscopy (FLIM). 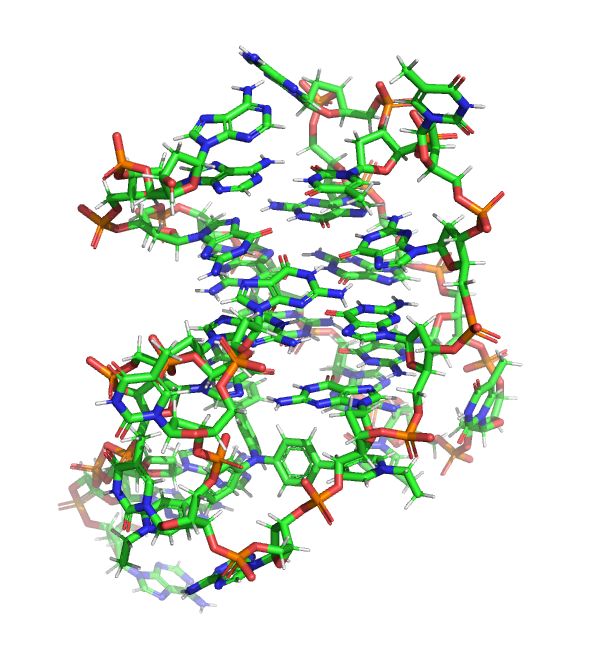 The research has revealed a link between the formation of four-stranded structures and DNA replication. It has also been found that small molecule ligands can be used to stabilize the G-quadruplex structures. 3 Therefore, it has been proposed that G-quadruplex structures in rapidly dividing cancer cells could be targeted by synthetic molecules that would trap them in order to inhibit cell division. British Indian Chemist Shankar Balasubramanian has claimed that ‘[this finding] strongly supports a new pharmacological paradigm to be investigated;using these four-stranded structures as targets for personalised treatments in the future represents an important development in cancer research.’ 2

However, at the time of the finding, such  structures remained hard to visualize in-vivo and the available methods involved either killing the cells or using high concentrations of probes which could lead to increased cellular stress and disturbances in the endogenous folding dynamics of the four-stranded structures. In July 2020, a G4-specific fluorescent probe that could be used in low concentrations of approximately 20 nm and would allow for real time detection of individual quadruple-helix molecules in the nucleus of living cells was introduced by researchers. 4 This innovative technique has led to further information about the biological role of G-quadruplexes. Moreover, one of the hypotheses developed by the researchers involved the formation of four-stranded DNA molecules to hold DNA strands apart and facilitate processes which involve DNA strands being separated such as transcription and replication. The study also revealed that the molecules are very quickly degraded, indicating that they only form to ensue certain functions. They have also been found to often form in genes associated with cancer. Further study of these mechanisms could therefore lead to significant advances in cancer therapy.5

Another significant result followed and in January 2021, a group of scientists reported that a fluorescent probe with a high affinity for DNA quadruplexes, DAOTA-M2, could be used in conjunction with fluorescent lifetime imaging microscopy in order to visualize and study G4s within the nuclei of live cells. A FLIM map of nuclear DNA within stained cells can be seen in Figure 2. The advantage of this technique is represented by the fact that it is based on quantifying fluorescence lifetime instead of fluorescence intensity and hence, the low concentration of quadruple-stranded molecules would not present an issue. Therefore, the research group has been able to use this method in order to study the interactions of quadruple-stranded DNA within cells and the restriction of the expression of helicases, enzymes with the role of separating DNA strands. Helicase inhibition was found to lead to increased concentrations of G4s, indicating that they play a significant role in the degradation of quadruple strands. It was also demonstrated that DAOTA-M2 could be used for studying the interactions between G4s and various binders, an approach which could prove extremely useful in studying anti-cancer G4-targeting drugs.6 The exciting  outcomes of this study will significantly facilitate the development of G4-targeting drugs and hence, could lead to breakthroughs in cancer research.