Viruses are obligate microparasites (Lodish et al., 2000) which pose a great public health threat, as highlighted by the current COVID-19 pandemic (WHO, 2020a). Pandemics are the global spread of disease, with the ongoing HIV/AIDS (Eisinger and Fauci, 2018) and 2009 influenza A/H1N1 pandemics (WHO, 2020b), as viral examples. Virus emergence is increasing with rising human population density, changes in land use, and the arrival of international trade and travel (Morse et al., 2012). This highlights the need to identify and prevent pandemics through identification and targeted surveillance of candidate viruses (Neumann and Kawaoka, 2019). This essay aims to discuss whether the next pandemic virus can be predicted; focusing on identifying, characterising, and modelling viruses to assess their pandemic potential, and the associated challenges.

To predict the next pandemic virus, circulating and novel viruses need to be identified for later characterisation and modelling (Figure 1) (Neumann and Kawaoka, 2019). Identification has previously involved immunohistochemistry, serology, electron microscopy, and cultures (Morse et al., 2012). These techniques aided in the identification of SARS coronavirus, Nipah virus, and West Nile virus, among others.  However, due to low cost and development of next generation sequencing technology, genomic surveillance has significantly improved, with Oxford Nanopore Technologies providing rapid and early identification of viruses in the field (Morse et al., 2012).

Most pandemics have been caused by zoonotic single-stranded RNA viruses (Morse et al., 2012; Babayan, Orton and Streicker, 2018), highlighting the potential for reservoir surveillance. This is challenging due to the large number of known mammalian and avian species but can be improved through targeting species and regions (Morse et al., 2012). Babayan et al. (2018) showed in single-stranded RNA viruses, that reservoir hosts could be determined through the analysis of the viral genome, with reference to phylogenetic relatedness and genomic biases. Their results identified an unexpected primate reservoir for the Bundibugyo and Tai Forest Ebolaviruses which still needs validation, but highlights the presence of unknown reservoirs, and that increased understanding will direct and enhance virus surveillance. 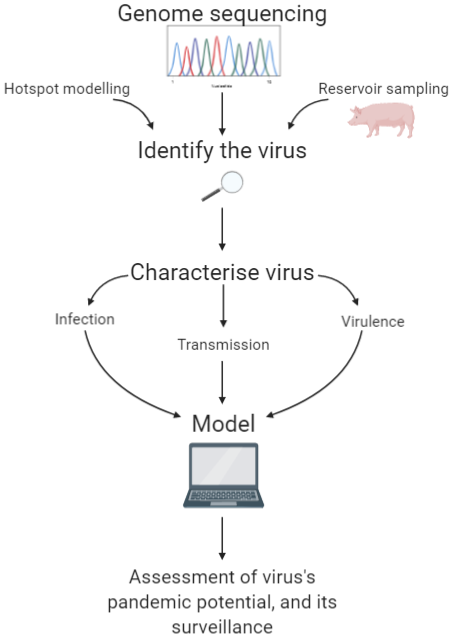 Figure 1: – Flowchart of steps involved in characterising a virus to access its pandemic potential. Stages involve identifying the virus via genome sequencing guided by reservoir sampling and hotspot modelling, and identifying viral, host and environmental factors which influence infection, transmission, and virulence (Tabacknick, 2010). Final stage involves modelling the virus based on its characteristics and viral-host interactions (Neumann and Kawaoka, 2019)

Hotspot modelling enhances reservoir sampling, targeting it to regions of high virus emergence. It considers human occupations and behaviour, where areas of high human-animal interactions are targeted (Morse et al., 2012). Machine learning has been used to predict reservoirs and hotspots of high novel reservoir diversity in rodents (Han et al., 2015). The model predicted reservoirs with 90% accuracy, finding hotspots in Central Asia, the Middle East, and the Midwestern United States, and highlights the potential to accurately target reservoir sampling.  Hotspot modelling can also direct the collection of viral samples from healthcare institutions, allowing nosocomial viruses to be identified and analysed (Neumann and Kawaoka, 2019).

Unfortunately, reservoir and hotspot surveillance is not global, with gaps in Africa and South America (Neumann and Kawaoka, 2019). Additionally, some pandemic viruses such as HIV, do not have reservoirs, although they have zoonotic origins (Morse et al., 2012), highlighting that reservoir surveillance will not uncover all pandemic virus candidates.

In order to cause a pandemic, a virus needs to infect humans, transmit between them, and be virulent (Neumann and Kawaoka, 2019). These characteristics can be evaluated and used to determine a virus’s pandemic potential (Figure 1). Many elements within each of the characteristics can be investigated, however, certain elements have a major bearing on whether a virus can be pandemic and will be discussed further.

The receptor binding specificity of a virus is vital in establishing an infection (Neumann and Kawaoka, 2019), as binding allows the virus to enter the host cell, and can be used to determine whether a virus can infect a host (Neumann and Kawaoka, 2019). This is demonstrated in influenza infections (Figure 2), where the pandemics of 1918 (A/H1N1) and 1957 (A/H2N2) were caused by viruses with HA molecules which favourably bound α2,6-linked sialic acids, although they had avian origins (Matrosovich et al., 2000). This emphasises that receptor binding specificity is an indicator of pandemic capacity. Binding specificity can be determined through solid-phase binding assays and glycan arrays, but these are not representative of all the sialyloligosaccharides expressed in the human upper and lower respiratory tracts (Neumann and Kawaoka, 2019). Viral genomic and amino acid sequence data may be more informative, where mutations in the HA protein can be identified and their implications in human receptor binding can be assessed (Matrosovich et al., 2000).

A virus’s ability to transmit between mammals is vital towards determining viral pathogenicity (Neumann and Kawaoka, 2019). The influenza A/H5N1 virus can infect humans (Herfst et al., 2012) but cannot currently cause a pandemic due to its lack of airborne transmission (Herfst et al., 2012). This highlights the importance of addressing viral transmission between humans as well as its ability to infect.

Mammals can be used to study transmission, with ferret models used to investigate influenza viruses (Neumann and Kawaoka, 2019). Ferrets are susceptible to human and avian influenza viruses and can transmit them through direct and indirect contact, and exhibit same pathology as seen in humans (Herfst et al., 2012). These models assess how far the virus is from evolving the ability to transmit between mammals or humans. Herfst et al. (2012) showed that influenza A/H5N1 can become airborne transmissible between ferrets after obtaining 5 substitution mutations from serial passage in ferrets. This highlights the pandemic potential of A/H5N1 if it were to gain airborne transmissibility. The understanding of the virus’s pandemic capacity was heightened through surveillance which found that two of these substitutions are common in A/H5N1 viruses (Russell et al., 2012). This highlights the insight animal models can provide in assessing viral pandemic capacity, and how these findings are vital for surveillance. These models require high biosafety and biosecurity containment measures, due to the mutagenesis of potentially pandemic viruses (Neumann and Kawaoka, 2019), challenging the characterisation of this feature.

Antigenic relatedness to circulating viruses plays a major role in the virus’s ability to infect and transmit, as it influences whether the antibodies present in the host population can clear it and prevent its transmission (Neumann and Kawaoka, 2019). It also refers to the immune status of the population and the proportion of individuals who are vaccinated against an antigenically similar strain (Trock, Burke and Cox, 2015). Influenza pandemics usually occur when a large proportion of the population is immunologically naive to the antigen (Tscherne and García-Sastre, 2011).

Genome sequencing can determine antigenic relatedness (Neumann and Kawaoka, 2019), however, the genetic distance between viruses that would allow a novel virus to become pandemic is currently unknown. Transmission of the candidate virus between mammals either previously infected with or vaccinated against an antigenically similar strain, or unvaccinated, permits further information on antigenic distance (Neumann and Kawaoka, 2019). This method assessed the role of antigenic variability the 2009 disease demographics of the influenza A/H1N1 pandemic, which showed higher infection rates and more severe disease in younger people (Manicassamy et al., 2010). It was suggested that older individuals gained protection from exposure to 1918 (A/H1N1)-like influenza viruses which circulated until 1943, or A/H1N1 vaccination in 1976. Murine models were used to confirm the protection provided by exposure to these antigenically similar viruses (Manicassamy et al., 2010).

Virulence is important to estimate, as viruses can infect their hosts asymptomatically (Russell et al., 2012). Tscherne and Garcia-Sastre (2011) identified universal virulence determinants for influenza viruses. One determinant was a multi-basic cleavage site in HA, which opposed to a low pathogenicity single-basic cleavage site, allows systemic infection. These molecular determinants can be sought out in other viruses as indicators of their virulence. However, to increase understanding of how these determinants translate into pathogenicity and how they influence pandemic potential, more viruses should be sequenced for comparison (Tscherne and García-Sastre, 2011).

Individually these characteristics cannot predict the next pandemic virus, as viruses need to obtain multiple features to become pandemic. Models bring these different features together and assess pandemic probability (Figure 1) (Neumann and Kawaoka, 2019).

The Influenza Risk Assessment Tool (IRAT) assesses influenza A viruses which are not yet circulating in the human population (Neumann and Kawaoka, 2019). It does not predict the next pandemic influenza virus but assesses its pandemic potential, allowing prioritisation of resources to the greatest threat (Table 1) (Trock, Burke and Cox, 2015). Although informative, it is hard to obtain all the information required by the model, specifically experimental data, when dealing with novel viruses prior to or during the early stages of their emergence (Neumann and Kawaoka, 2019). This was seen when assessing novel A/H7N9 in April 2013 (Trock, Burke and Cox, 2015). Information on the virus’s ability to transmit between mammals was not available at the time, affecting the pandemic score of the virus when addressing emergence (5.2/10). By May 2013, the information was available and could be incorporated into the model, giving a score of 6.2/10. The difference between the emergence scores was more severe compared to the impact scores, due to the weight given to transmission (Trock, Burke and Cox, 2015). This highlights the importance of providing models with all the information they require, especially heavily weighted factors.

Simulations can model global spread, as shown by the recreation of the SARS 2003 outbreak, using local infection and individual global travelling dynamics (Hufnagel, Brockmann and Geisel, 2004). The simulation almost perfectly predicted the countries and the populations in these countries that would become infected. However, many cases were predicted in Japan, while none were declared (Hufnagel, Brockmann and Geisel, 2004). This highlights the role simulations have in forecasting the spread of an outbreak. SARS, however, was not declared a pandemic (WHO, 2020c), suggesting that pandemics may require specialised models.

Although viral properties can be determined, with models to help assess pandemic potential, the interactions between hosts, environmental factors, and in certain cases, vectors (Hollingsworth et al., 2015) needs to be considered. These are hard to model due to their complexity and the limited understanding of mechanisms underlying these interactions (Tabachnick, 2010). This makes the exact scale an outbreak will reach hard to determine, preventing an accurate prediction of the next pandemic virus (Trock, Burke and Cox, 2015). Furthermore, many models are limited by the need for sufficient population infection levels, as seen when evaluating the pandemic capacity of influenza viruses, whose cases accumulate slowly (Gambhir et al., 2015). Information required by models is sparse during the early stages of outbreaks (Walters, Meslé and Hall, 2018), challenging pandemic prediction.

In conclusion, there are many challenges associated with obtaining information on the different characteristics which contribute to a virus’s ability to reach a pandemic level, including its identification and modelling. Therefore, it is not currently possible to predict the next pandemic virus or its magnitude, however, with current models and surveillance, when the next viral pandemic does arise, the viral culprit will come as less of a surprise. This is seen in the SARS-CoV-2 pandemic, which originated as an epidemic in China, making its transition into a pandemic less of a shock.